Hi,   Just wanted to say a big thankyou for all the gardening equipment we ordered. It all ar ... 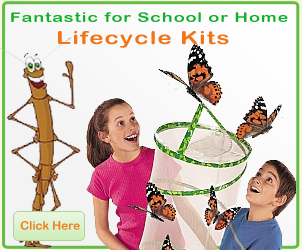 1 There are over 2,500 species of stick insect in the World.  Indian Stick Insects are just one variety.  Their Latin name is Carausius morosus.  They come from the Shambaganur region of Southern India.

2 Stick Insect Eggs are round and brown with a yellow nodule.  They look like tiny seeds.  One female can lay several hundred eggs during an average life of around a year.

3 Inconveniently for anyone keeping stick insects as pets, stick insect droppings or waste can easily be mistaken for eggs and vice versa.  Makes it hard to know what to throw away when you clean out the cage!

4 When they hatch out Indian stick insects are tiny – around 10mm but grow to around 10 cm in six months.

5 Being insects, Carausius morosus (to back to Fact 1 if you need to check the meaning of this Latin term) have no internal skeleton.  They rely on a hard outer body for rigidity.  To allow for rapid growth, they shed their outer skin several times.  After shedding a skin, they will hang from a twig to harden their new outer layer.  During this period they are weaker – try not to disturb them!

6 Ivy, hawthorn, brambles and privet make great food for your pets.  Help to retain the moisture in the stems by sticking them in green florists’ oasis.  Don’t put the stems into a bowl of water – your pets may drown.

7 Only one in one thousand Indian stick insects are male.  This species is parthenogenetic, which means the females are able to lay fertile eggs on their own.

8 Stick insects are very good at hiding. At night they can become slightly darker to make them harder to spot and occasionally you will see them swaying.  This is their way of trying to look like a stick swinging in the breeze.  If you hold your pet, it may fold up its legs into itself so that it really looks like a twig. You can own your very own stick insects as pets by purchasing a complete Stick Insect Kit.

9 These creatures breathe through a series of holes called spiracles which are located along the side of the body.

10 If a young stick insect loses a leg it is sometimes able to grow a new one in a process called regeneration.  The new leg will, however, be smaller and not as useful to be careful when handling your pets.